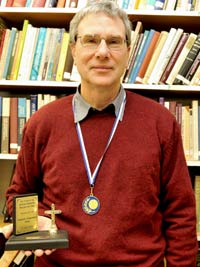 Professor Chuck Wanamaker was hailed as "an unsung hero and a role model" when the People of God Ministries acknowledged his developmental work in poor communities with two accolades.

The Mfuleni-based congregation awarded Wanamaker, head of the Department of Religious Studies at UCT, with a Community Development Award and a Role Model Award.

Wanamaker received the first honour for his work with scores of young soccer stars in Khayelitsha, Langa and Gugulethu, giving them opportunities to play competitive football and stay out of trouble. He raised money for kit, players' transport costs and even post-match meals.

"I have done this informally as a part of my own self-understanding of who I am and what my responsibilities are to those around me," Wanamaker says.

Church leader Dr Christina Masondo, a UCT tutor, praised Wanamaker for going out of his way to help poor communities.

"As a church, we would like to see all South Africans participating in the building of our new country, and feel that it is pivotal to encourage those who are involved in that venture."