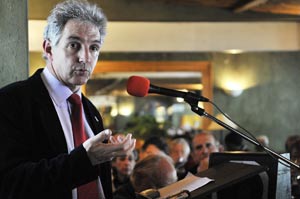 UCT's contribution to 'free' higher education and its difficulties with transformation were but some of the topics that Vice-Chancellor Dr Max Price tackled when he addressed a lunchtime meeting of the National Press Club of South Africa on 2 June.

Guest speaker at the session, Price started off by noting his support for the recent split of the national Department of Education into two - the Ministry for Basic Education, focused on schools, and the Ministry for Higher Education and Training. For one, said Price, this puts an end to the "tension" over a single budget pie that, previously, had to be divided between schooling and higher education. (That battle, he added, would now rage at Cabinet level.)

"Higher education is a very core part of the economy, and having a ministry dedicated to that is a good thing, I think," he said. "It helps to have a ministry to go to bat for you."

On the recently raised issue of free education up to a first degree, Price explained how, through its own financial aid scheme and the National Student Financial Aid Scheme, UCT helps disadvantaged students get into higher education. The current funding system allows universities to "differentiate" their offerings and fees, and compete for students, he argued.

"I don't think there's any difference between Minister Blade Nzimande's position and my position with respect to the goal," Price said. "What we all want is that poor students should have access to higher education.

"I think we can address the issue of access while maintaining differentiation, as long as there is a decent financial aid scheme."

Speaking on transformation, Price explained how UCT - much like other universities in the country - is experiencing problems recruiting black students from a very small university-ready pool, and hanging on to black academics.

He also reported on how UCT had recently re-opened the debate on the use of race as a proxy for disadvantage in its admissions policy, given that much has changed in South African society (notably more black students getting into better schools).

"But I think there is validity in having race as part of that admissions policy, even today," he said.