Centre introduces high-tech to the poor 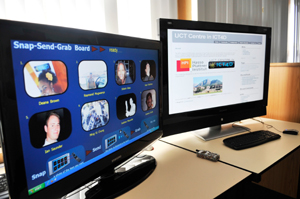 By hitting a few buttons on a cellphone, users can now find just about any information they need, thanks to the UCT's new Information Communication Technologies for Development (ICT4D) Centre.

Launched by the Department of Computer Science recently, the centre, which is supported by the Hasso Plattner Institute (HPI) in Germany, aims to serve people and regions that don't have full access to digital technology.

ICT4D looks at how information technologies can be used to tackle socio-economic problems in developing countries.

Much of the UCT centre's work focuses on the use of cellphones, instead of PCs, to assist poor communities to access the internet, for example. That is because cellphones are so commonplace these days, even in disadvantaged communities.

"There are one billion people in the world with access to the internet, but there are 3.4 billion people who own cellphones," explains Associate Professor Gary Marsden, director of the centre.

The centre is involved in a score of projects. In one 'snap and grab' system, users take pictures with their cellphones, for example of a politician, send that image to the centre, and receive text or video information on the politician via bluetooth.

These systems have been tried and tested on a training project in Khayelitsha, and on voter education in Kenya.

Marsden said the centre works closely with communities to create and evaluate technology that is best suited to their conditions.