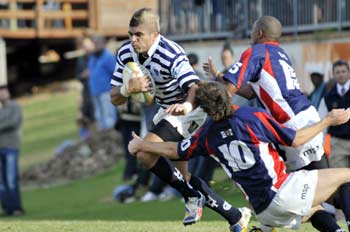 The FNB UCT First XV got their Western Province Super League season off on just the right note on Saturday, 18 April - a 29-8 drubbing of Durbanville-Bellville, away in Durbanville. The match was marked by solid tackling from UCT, a couple of close referee's calls that could've earned UCT a few more tries, and a stunning solo try by substitute Therlow Petersen. Petersen, top try-scorer in the recent Varsity Cup, touched down twice, with Marvin Christians and Timothy Whitehead chalking up a try apiece as well. UCT next plays Victorians on the evening of Wednesday, 22 April. The game also signalled the return of a number of UCT 'old boys', including crowd favourites Vakai 'Fish' Hove, Craig Kleu and Herbert Mayosi. In the picture, UCT's Marvin Christians eludes Durbell's Erich Haggard (10) and Ederies Arendse. 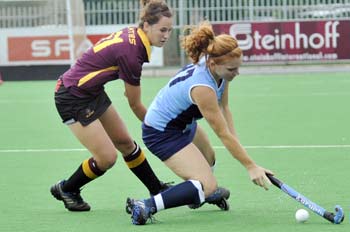 There were mixed fortunes for UCT on their opening days of their 2009 Western Province Grand Challenge season. The men and women's A-sides, who played their fixtures on Friday, 17 April, got the weekend off to a bright enough start, both pitted against the B sides from the Western Province Cricket Club. The men thrashed their rivals by 4-0, while the women eked out a 2-1 win. UCT's second sides didn't fare nearly as well in their Saturday, 18 April, matches. The men lost 0-3 to Durbanville, while the women suffered a 0-5 defeat against Victorians. In the picture, UCT B's Ricole Green (right) tries to get away from Victoria's Anna Malan.