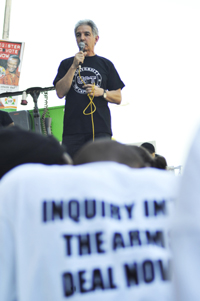 Friday 6 February saw the opening of Parliament, and Vice-Chancellor Dr Max Price joined hundreds of Social Justice Coalition (SJC) supporters in a march to condemn corruption and demand that South Africa's leaders be held accountable for their actions.

"We need a government that is open to the type of scrutiny that will ensure that political and other leaders are called to book immediately if there is proof of impropriety," he said in a communiqué to staff and students.

"If anyone among us is not called to account for their actions, the social and moral fibre of society is endangered."

He also called for an independent prosecutorial and judicial system and a free press.

"It is our responsibility as citizens to defend the independence of the press and courts, and to hold leaders to account. This is a citizen's responsibility when living in a democracy."

Price said he had been proud to march alongside others who supported the SJC's call to action.

"As a nation and as a university, we have a long and proud tradition of activism and standing against injustice.

"This is what thousands of our compatriots and academic colleagues did during the fight against apartheid, and we need to remember their courage and conviction during these turbulent times of nation-building."

It is particularly exhilarating to finally have a Vice Chancellor who is an activist at heart; who is not too detached to leave his jacket and tie in his office, wear a plain T-shirt and join in picketing about a particular area of concern, as has happened recently. What we have been lacking in this university is a show of astute leadership when it comes to matters of activism and working towards making this country a better place for all. Hopefully, we can now look forward to a new era of making the university community more involved in activities of developing and shaping this country into one that is abundant with equitably distributed prosperity. However, it goes without saying that it was gravely disappointing to note the fact that the VC's recent call for activism in social justice had almost nothing to do with true social justice, in my understanding. Until proven wrong with hard, substantive facts, it is my belief that social justice is about ensuring the delivery of justice to ordinary citizens at the grass-roots level of our society who are faced with a multitude of socio-economic injustices on a daily basis.

This excerpt is taken from a letter by student Tende Makofane. For the full missive click here.