Both sides played in the final of the inaugural league last year, Maties beating the Ikey Tigers 16-10 in the dying minutes of the game.

On Monday a record crowd of approximately 7 500 spectators watched the teams take a defensive stand, with both sides seemingly unwilling to take risks. Play was initially patchy, with referee Francois Veldsman doing his best to control the many breakdowns in play. 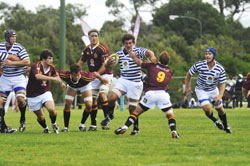 After a largely conservative game, UCT ran at the Maties' defence in the final quarter. UCT fullback Tiger Bax, left wing Marvin Christians and scrumhalf Stuart Commins all ran with the ball, bringing some excitement to the game.

Commenting on the crowd, rugby club administrator Gavin Sheldon said that this was the biggest crowd in the history of UCT rugby.

"This attendance shows that people are hungry to see traditional university rugby played at a high level," he said.