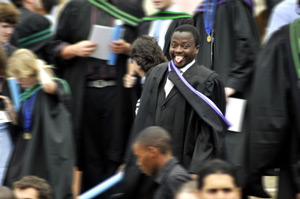 A record nine of these came from the Department of Molecular and Cellular Biology.

They were among thousands of other students who closed the final chapter of their academic lives, donning hoods and gowns to be capped in the stately Jameson Hall from 8 to 12 December.

Graduates from the Faculty of Engineering & the Built Environment numbered 671 (690, 2007). The faculty awarded 12 PhDs and 76 master's degrees.