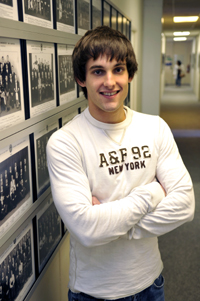 When Chris Ryall accepted the nomination to be a member of the 2008/09 Student Representative Council (SRC), he decided to put his studies on hold.

Next year Ryall, who was elected as the new president of the SRC, will do just one subject towards his degree in business science, and dedicate most of his time to the council.

He believes that his "fantastic" 14-member team would "bring the SRC back to students" and improve their lives.

Ryall is one of seven students from the Democratic Alliance Student Organisation (DASO) on the SRC, which also includes five from the South African Students Congress and three independent candidates.

Ryall wants SRC members should be visible, and plans to avail himself for one-on-one meetings every week.

"This is the SRC students will see, hear and feel."

While the new members must still meet to draft priorities, Ryall believes that access, retention and throughput of students are some of the issues that need SRC attention.

"Access has been achieved, but UCT needs to be a place that takes responsibility for supporting students, and ensuring they acquire skills so their degrees benefit them and their communities."

He was concerned, however, that 14 years into democracy, the country had not arrived at a definition of transformation.

"When we talk about transformation, students are not sure what we are talking about, and that needs to be explored."

However, people were starting to look beyond the colour lines, he added.

The SRC, Ryall noted, should also be and transparent and accountable for its actions. To ensure this, independent audit and review bodies would be set up to keep them in check.