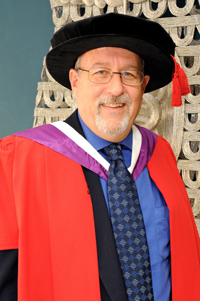 Too often, the legacy of race science has overshadowed the valuable contributions made by forensic anthropologists to the origins and history of communities, Professor Alan Morris (human biology) said at his inaugural lecture, The Politics of Old Bones.

Morris explained that, though sometimes dogged by misunderstanding and political gamesmanship, their work provides clues to the sometimes unrecorded histories of local communities.

"Not everyone thinks that what I do for a living is respectable. For a significant and very vocal group here in Cape Town, anyone who studies the physical remains of humans is not a legitimate scientist."

For many, the work of forensic anthropologists remains tainted by the kind of race science that focused on racial differences, which was favoured by the Nazis and architects of apartheid.

Public knowledge of physical anthropology had not taken into account changes that had occurred since.

"There are still activist social scientists who believe schools like Wits and UCT are centres of 'racial science'. This came to a head during the excavation of the Prestwich Street remains in 2003 and 2004, and resulted in a situation where a whole series of archaeological skeletons were excavated but not studied," Morris said.

The fact grieves him still.

He said South African anthropologists had not been very successful in popularising their field.

He welcomed the new approach to dealing with human remains, embodied in the Vermilion Accord. This does not prevent the excavation of old human bones, but demands that archaeologists work in tandem with descendant communities.

"Researchers and relatives are asked to reach an agreement in which both the wishes of the descendant communities and the legitimate concerns of science and education are negotiated."

While praising the practice guidelines of the South African Heritage Resources Agency (SAHRA), which "look good on paper", Morris said the system is open to abuse by manipulative parties.

The excavation of the human bones at Prestwich Street is a case in point. An agreement was reached between the developer of the Prestwich site and SAHRA to store the human remains.

"But sadly, the one area excluded from this new agreement was the study of the human remains. The activists raised the old 'straw man' of the race scientists, and bluntly refused to allow even the most basic assessment of who was buried on the site.

"My students and I tried everything we could to show them how we could decipher a wealth of information about health, lifestyle and demography from the skeletons, but to no avail."

Morris said the loss of information is the destruction of a heritage "that is mine as well as other people's".

Morris and his team have been involved in cases where they were able to identify missing people from TRC testimony. He referred to several cases of locating and identifying the remains of missing anti-apartheid activists.

"This ongoing project is quite different from the police forensics that is a more routine occupation of ours, because it aligns itself with human rights and restitution as much as with identification of the dead."

Morris said more students than ever were interested in physical anthropology. The group that has been working with the TRC is keen to join students from other institutions to establish an African Forensic Anthropology Team.

"They envision a group of expert forensic anthropologists who could be called upon to work on human rights cases throughout sub-Saharan Africa."

Tracing his academic evolution, deputy dean of research in the Faculty of Health Sciences, Professor Kit Vaughan, said Morris had been a major contributor to first-year human biology teaching.

"Over 3 500 doctors-in-the making were exposed to varied topics such as human evolution, the search for man's origins and the concept of race in natural science. This was a major and sustained contribution to the education mission of our faculty."

Delivering a vote of thanks, HOD Professor Sue Kidson drew attention to the importance of science in all spheres of life, and paid tribute to Morris' courage.

"There is no doubt that Alan has the courage to speak out, when others might have given up. We need to be acutely aware that long will our society rue the day where pseudo-science, or non-science, or nonsense rules. We need to support people of courage."