The Struggle in posters 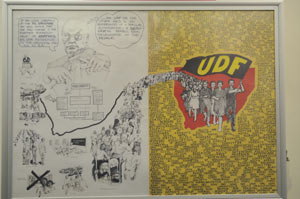 Original artworks and posters depicting the liberation struggles, in an exhibition titled Imaging the Struggles: An exhibition of Southern African struggle posters, have been gracing the African Studies Library for the past weeks.

The exhibition was mounted to coincide with a New Perspectives Conference, titled Liberation Struggles in Southern Africa, held at the Centre for African Studies in early September.

"The posters of the liberation struggle were both didactic and propagandist as well as constituting historical documents for successive generations," explains Sandy Shell, head librarian at the African Studies Library.

So, for example, the poster of Ruth First is particularly significant as it was produced at the Universidade Eduardo Mondlane in Mozambique within 24 hours of her assassination there, explains Shell. 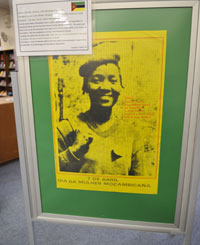 The posters, from South Africa, Mozambique, Angola, Namibia and Zimbabwe, as well from the auxiliary 'progressive' support movements in Europe and North America, were drawn from the collections housed in the African Studies Library. Two of the posters on display are original artworks created to promote the launch of the United Democratic Front (UDF) at Rocklands Civic Centre some 25 years ago.

The role of women in the liberation struggles throughout the region is also well represented (left).

The posters' significance lies in keeping alive the essence of the values for which so many fought and gave up their lives, says Shell.

The exhibition runs until 19 September.