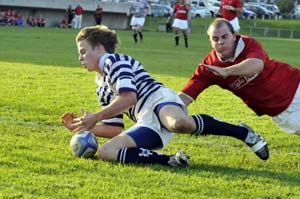 The FNB/UCT First XV got their season back on track with a convincing 45-11 win over Parow NNK on 31 May. This despite losing players to injury - not surprising as the match was UCT's 18th of the season already - and call-ups to the Western Province team. Added to that, many of the students had exam worries as well. Nonetheless, the players got stuck into NNK, outscoring their struggling rivals by seven tries to one. Flyhalf Matthew Rosslee, pictured above pouncing on a loose ball in the NNK goal area, touched down twice and booted five conversions.

It was also a touching farewell to Ish Dramat, the club's legendary team manager, scorer, water-bottle carrier, rugby encyclopaedia and supporter of over half a century. Dramat died on Tuesday, 27 May. The UCT Rugby Club will hold a memorial event for him on 10 June, starting at 17h30. 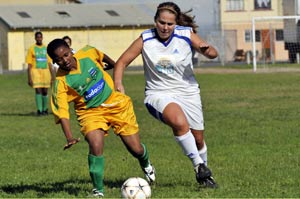 After a fiery start to their season - a 5-3 win over much-favoured Santos - the women's soccer team came down to earth with a bump on 31 May, losing 0-3 to Red Eagles in their contest in Heideveld. The team wasted a number of goal opportunities of their own, but also allowed their rivals too many openings at the back. Star player for UCT was the tireless Tory Tripp (pictured here bustling Red Eagles' Siphokazi Sobekwa out of the way), who had little support from her teammates, however.