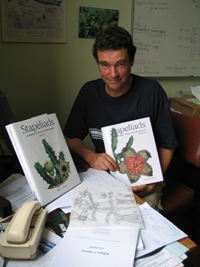 Dr Peter Bruyns' 25-years of research, trekking remoter parts of the globe in search of a group of fleshy-stemmed succulents known as Stapeliads, has borne fruit: a coveted UCT Book Award.

A mathematician specialising in the theory of permutation groups, Bruyns is an unlikely author for a monograph on plants. He is a rare academic, highly qualified in two disparate areas. He has a DPhil in mathematics from Oxford (1986), where he was a Rhodes Scholar, and an MSc in botany from UCT (1994). He is a research associate of the Bolus Herbarium, conveniently next door to the mathematics department on University Avenue.

His two-volume Stapeliads of Southern Africa and Madagascar is the first complete account of the group since American botanists Alain C White and Boyd L Sloane's three-volume The Stapelieae was published in 1937.

But since then there has been plenty of exploration by doughty botanists, leading to the discovery of many new species.

"It also led to the realisation that many of the species discussed by White and Sloane, who never had the opportunity to see any of these plants in their natural habitat, were not species at all," Bruyns notes.

In addition to bringing the systematic treatments of the 20 genera involved up to date with many of the most modern molecular and computer methods available to the plant systematist, the volumes provide "essential information for their accurate identification".

Stapeliads are succulents with striking, pentagonal-shaped flowers belonging to the family Apocynaceae, quite plentiful in the drier parts of Africa but generally considered very difficult to identify.

Bruyns' work - all 600 pages of it - deals with all 182 of the region's Stapeliads in great detail, including his own illustrations, line drawings showing the small details of the complex flowers, as well as photographs and distribution maps.

This work has brought together information from many sources, the results of exploration and research over the past 60 years on Southern African Stapeliads, ie those found in Botswana, South Africa, Namibia, Zimbabwe, Mozambique and Madagascar.

The fascination for Bruyns lies in their mysterious habitat (they are notoriously difficult to find in the wild), the curious geometry of the stems and the remarkable symmetries of the flowers, as well as the astonishing variety of different strategies that they employ to persuade insects to visit their flowers and pollinate them.

"The pollination modes are especially delicate in some cases, akin to a complex docking system where the tiny pollen bags carried by the fly are deposited in a groove in the receptor flower."

Bruyns does most of his fieldwork during sabbaticals, after the rains, when the plants are in flower. For this, he's tramped some of the world's more isolated places in search of specimens: Eritrea, Ethiopia, Yemen, Nepal, the Canary Isles and Burma.

"The eerie beauty of the Stapeliads makes it easy to understand why a scientist would be drawn to investigating them," commented acting deputy vice-chancellor for research, Professor Danie Visser." They are often described as the orchids of the succulent world, and this magnificently illustrated work does full justice to these weird and wonderful plants.

"But more than that, with this book, published about 300 years after the death of Linnaeus, Peter Bruyns has made a major contribution to plant taxonomy. His 25 years of research has been rewarded by the acclaim with which Stapeliads of Southern Africa and Madagascar has been received all over the world and he richly deserves the prestigious UCT Book Award."

Meritorious Awards for 2008 were made to Professor Johann Lutjeharms (above) of the Department of Oceanography for his publication, The Agulhas Current, and to Emma van der Vliet (below) of the Centre for Film and Media Studies for Past Imperfect.

The latter is one of very few works of fiction nominated for a UCT Book Prize. JM Coetzee is the only novelist to have won the award twice, for Waiting for the Barbarians (1984) and Age of Iron (1990). In 2006, among other books, Meritorious Awards were given to two novels, Susan Mann's One Tongue Singing and Mary Watson's Moss.

The 2005 winner of the UCT Book Award, The Moral Economy of AIDS in South Africa by Nicoli Natrass, was recently awarded the prestigious Bill Venter/Altron prize for 2007. In 2003 Professor Jeremy Seekings won this prize for The UDF: A history of the United Democratic Front in South Africa, 1983-1991, and in 2004 Professor Vanessa Watson's Change and Continuity in Spatial Planning took the laurels.