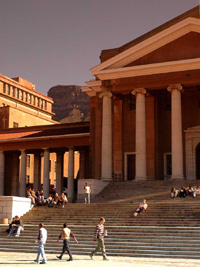 The observation by editor Martin Ince in the The Times Higher Education Supplement sums it up nicely: ". . . the University of Cape Town finally enters the top 200 after three years of near misses."

The occasion, of course, was UCT becoming the first African university to make it into the top 200 - the list of high flyers that make it into print - of the THES-QS World University Rankings, conducted each year by The Times Higher Education Supplement and study-abroad specialists Quacquarelli Symonds.

It also marks UCT's rise into the top half of the list, which ranks a final pool of 500 institutions. Just a few years ago, the university was placed around the mid-300s, and moved up to 257th place last year.

UCT scored particularly well in the recruiter reviews and its intake of international students, as well as citations. Its 68 points out of a possible 100 in the latter is, particularly, a feather in the university's cap.

"Contributing factors are that we emphasise the importance of high-quality research and particularly the importance of peer-reviewed publications in high-impact journals, in those disciplines where this is appropriate," says Professor Cheryl de la Rey, deputy vice-chancellor for research.

"UCT takes seriously its stated mission of providing an internationally recognised education which is locally relevant, at the same time enabling our students to enjoy an international environment right here on campus," comments Professor Thandabantu Nhlapo, deputy vice-chancellor for student life. "We have never doubted that diversity is good for its own sake and that, in an academic environment, it is a priceless foundation for vibrancy of thought and an impetus to creativity."

But editor Ince recognises that universities from developing countries may be punching above their weight.

"Despite the presence of South African, Brazilian and Mexican institutions in this table, the overall message of these rankings is that the sort of universities we list here, mainly large, general institutions, with a mingling of technology specialists, are a dauntingly expensive prospect for any country, let alone one in the developing world."

It's a hard row to hoe for smaller universities when they go up against institutions with much deeper pockets. In the US and UK, for example, governments pump billions of dollars into higher education, and privilege universities and colleges with tax breaks, notes Ince.

"There is no reason to suppose that brainpower is not distributed uniformly around the world," he adds. "But it is only one of the inputs to academic excellence.

"It is hard to imagine a world-class university in a country that lacks a significant tax base."

Which makes UCT's achievement - even a modest 200th place - all the more commendable.

"International rankings are becoming increasingly important in a global education market," says Vice-Chancellor and Principal, Professor Njabulo S Ndebele. "And I believe the rating bears out our mission to be an African university of international repute.

"It's a tribute to the dedication and hard work of the entire university community."