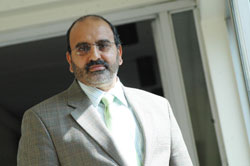 UCT alumnus Professor Ebrahim Moosa, professor of Islamic Studies at Duke University in the US, became the first South African scholar of Islam to deliver one of the prestigious Dourous Hasaniyya lectures, hosted by King Mohammed VI of Morocco.

Moosa delivered the last of the eight lectures, titled Ethical Challenges in Contemporary Islamic Thought at the Qarawiyin Mosque in Fez, Morocco on 9 October.

He discussed how inherited Muslim traditions and practices are applied in times when social experiences and human imagination are very different to the times in which such practices originated. He called for a greater interaction and engagement of the humanities and social sciences with traditional Muslim disciplines such as the science of the interpretation of the Qur'an.

The Dourous Hasaniyya lectures are held annually in the month of Ramadan and are nationally broadcast in Morocco and beamed across the Arabic-speaking world and Western Europe.