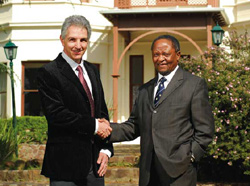 To maintain its world-class legacy and avoid slipping into a â€œsecond leagueâ€ status, UCT will have to adopt global trends in higher education, foster internationalisation and train its graduates for the world economy, Vice-Chancellor designate Dr Max Price said.

Price was responding to questions at last Friday's media conference to announce his appointment. He will take the reins from Professor Njabulo S Ndebele on 1 July 2008.

Ndebele served in this position for eight years.

Price has a strong transformation record, built primarily during his deanship of the Faculty of Health Sciences at Wits University (1996 to 2006). A former Rhodes Scholar, Four Outstanding Young South Africans Award winner (1992), and Student Representative Council president, he is currently an independent consultant in the fields of public health, health policy, medical education, and human resources for health planning.

Chair of the UCT Council and of the Selection Committee, Geoff Budlender, said: â€œAs a student he led opposition to apartheid and was detained without trial. This commitment was carried through to his professional work as a doctor and as a researcher, and in the work he did in proposing post-apartheid health policies.â€

Budlender said the Council had no doubt that Price would make a significant contribution to UCT and to higher education.

â€œHis record shows major transformation achievements and extensive senior executive management experience. His vision for UCT is exciting and his leadership will be inspiring.â€

Prof Ndebele said he was pleased to be able to hand the reins to a candidate of Price's talent and proven record of advancing transformation.

â€œHe is held in high esteem by his peers, both locally and internationally. His experience in higher education is noteworthy and his leadership skills will be invaluable within the university and as he addresses the challenges facing higher education in Africa.â€

Ndebele said there would be a period of overlap to ensure a smooth transition.

Price lauded UCT and Ndebele's strong leadership and transformation programmes, adding that he would inherit a â€œconsolidated, stable and well-organisedâ€ institution.

â€œThis creates the opportunity for taking the university to yet another level. I believe it is in participating and competing with the best the world has to offer that UCT can and will make its largest impact locally.â€

He said UCT would have to prepare graduates to work in Africa and abroad and roll up its sleeves to assist potential students emerging from the secondary education tier, where maths and science literacy levels had declined.

â€œI'm sure UCT does a lot of this anyway. This is not news for UCT.

On UCT's role in Africa, Price said UCT â€œdoes more work on Africa than any other universityâ€.

â€œThe way UCT would be a global player is by being the place where people will come to learn about Africa.â€

After July next year Prof Ndebele plans a year's sabbatical to do some writing. But he hopes to maintain close links with academia, where he has spent many years.