THRIP awards for Fletcher and Vaughan 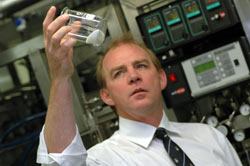 Prof Jack Fletcher and his team are working on novel catalysts and catalytic processes.

They have also developed technical-scale industrial test facilities, several of which are destined for the industrial partners' laboratories.

Vaughan (left), of the Department of Human Biology, is project leader of a team that developed a low-dose X-ray system that can be used for a number of specialised applications, including mammogams and the detection of TB in children.

The Statscan machine uses slot scanning digital X-Ray technology to create high resolution images. It was developed by Lodox Systems (Pty) Ltd and was put together with input from researchers at Groote Schuur and the Red Cross Children's Hospitals, using THRIP funding.

An important sub-project is the development of a computer assisted diagnosis (CAD) system that detects TB in children, based on their X-Rays. The Lodox Statscan can image fine detail, picking up changes in the airway diameter or structure.