Tik users aggressive and too depressed 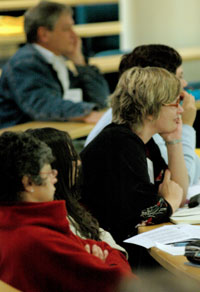 High school learners using "Tik", the street name of methamphetamine in Cape Town, are aggressive and suffer from high levels of depression, research has revealed. Also, the proportion of patients in treatment for 'tik' abuse, in particular those under the age of 20, has jumped from 10% in 2003 to over 70% in 2006.

These shocking revelations are contained in a study by Andreas PlÃ¼ddemann and Charles Parry of the Medical Research Council, UCT's Professor Alan Flisher and Rebecca McKetin of Australia.

The research was one of many presented at the 16th biennial conference of the South African Association of Child and Adolescent Psychiatry and Allied Professions (SAACAPAP), held at UCT from 11 to 14 September.

The tik research involved 15 schools and 1 561 learners in the south region of the Western Cape Department of Education. PlÃ¼ddemann said the aim was to investigate associations between the use of tik and a number of indicators of mental health, such as depression and aggressive behaviour. They found that 10% of male learners have tried tik compared to 8% of females, with many of them from the coloured communities.

The survey also showed that tik is the fourth most popular substance among learners after tobacco, alcohol and dagga. Researchers concluded that tik users have high levels of depression, but could not blame that directly on tik, suggesting further research.

In the picture above, delegates pay close attention to a presentation at the South African Association of Child and Adolescent Psychiatry and Allied Professions conference.