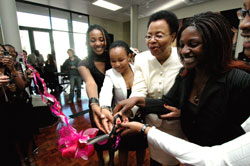 The first ladies of Graça Machel Hall (this year's residents were aptly called 'first ladies') and other distinguished guests got to celebrate with UCT Chancellor, Graça Machel, at the official opening of the new residence on 22 August.

The building, which can house 382 female students, is angular and earthy with a warm touch added through colour. In honour of its occupants, the opening address spoke of more than just the unveiling of the customary plaque. It was a celebration of being a woman.

Machel, who delivered the keynote address, decided that the day called for more than a prepared speech, and she put this aside to "speak from my heart". Machel, who has been a first lady twice, addressed the residents directly, and said that no matter what they do, they must decide to be the first.

"It's up to you to achieve it," she said. "This is a world-class institution, and you are to be world-class citizens."

Hailing from a very poor rural family, Machel said the residence recognises all those millions of rural girls in South Africa and Africa who yearn for education, but don't have access to it.

"We are privileged rural girls," Machel said. She added that she will retire soon, but before she does, wants to be assured that today's youth would want to make the right choices.

"With privilege comes responsibility: the responsibility to plough back until every child can exercise their right to education, so that education becomes a right, not a privilege."