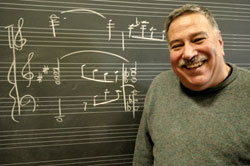 Welcome: Prof Peter Klatzow is the new director of the South African College of Music.

A celebrated composer, long-serving member of the College of Music Professor Peter Klatzow now takes over as director

Professor Peter Klatzow was welcomed as the new director of the South African College of Music (SACM) at a concert at the Baxter Theatre on 31 July.

The concert, titled Klatzow and More, featured a number of piano pieces written and performed by Klatzow and student Adrian More, who joins the Royal College of Music in the UK in September.

Speaking at the concert, Vice-Chancellor and Principal, Professor Njabulo S Ndebele, welcomed the new director. "With his great talent and over 30 years' experience at UCT, he will lead the college to even greater heights," Ndebele said.

Klatzow takes over the SACM helm from Associate Professor Franklin Larey, who has been appointed as director of the Adamant Music School's Summer Session in Vermont in the US.

Klatzow studied composition at the Royal College of Music in London, as well as in Italy and Paris. He joined UCT in 1973 and until his appointment as director served as professor of composition. He was elected a UCT fellow in 1976 for original academic work, and in 2002 he received the prestigious Molteno Gold Medal from the Cape Tercentenary Foundation for lifetime services to music.

An internationally acclaimed composer, Klatzow's works have been performed in Europe and the US.