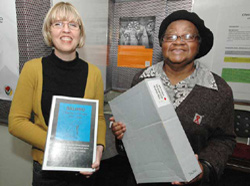 The old and the new: Lynn Woolfrey of DataFirst shows off the boxed set of DVDs that hold 30 years' of newspaper clippings, while Nomabaso Mquqo enjoys a moment of reflection with the old file boxes that she used for more than 20 years to collate and store the clippings. (Inset) History in a few boxes: SALDRU's clippings collection, close on 2 500 boxes, has found a new home at the University of Fort Hare.

Since 1975, the Southern African Labour Development and Research Unit has squirreled away an invaluable store of newspaper clippings, pored over by staff and students alike. Now in the high-tech digital age, that treasure has been saved onto DVD while the clippings have found a new home

The collection consists of over one million press clippings from seven major South African newspapers from 1975 to 2000. Each clipping is numbered and dated for quick reference. Covering 89 categories, including foreign trade, homelands, sanctions and violence, the collection is packed into 2 500 filing boxes and fills three full-sized rooms.

"It's an incredible resource," says Dr Francis Wilson, former SALDRU director. "It's been used by students, scholars and even international visitors."

But now, SALDRU's offices no longer have the space to store this bulky yet invaluable research tool. As a temporary measure, the collection was stored in the Chancellor Oppenheimer Library for a number of years, but again, space became an issue.

To protect the collection, each and every one of the million-plus clippings was painstakingly scanned into digital format by hand, a process that took about a year and cost about R300 000. When this arduous task was complete, the data filled 15 DVDs.

And instead of simply ditching the clippings themselves, SALDRU has found a new home for them: the Fort Hare University Liberation Archives, which is a collection of previously banned material from South African liberation organisations. The university is planning to construct a new building to accommodate this new addition to their already extensive archive.

In order to cover the expenses of scanning the collection and transporting it to Fort Hare, SALDRU sold limited edition copies of the 15 DVD box sets to universities in the US, the UK and South Africa. At UCT, the digital version of the collection is now available to postgraduate students at DataFirst in the Leslie Social Sciences Building.

"DataFirst grew out of SALDRU to make data easily accessible for researches in the social sciences," explains Wilson. "The digital revolution has made the storage and easy access of the clippings possible."