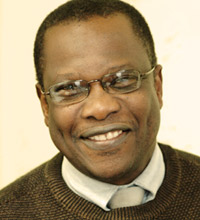 Great mind, strong hold: Professor Seyi Amosun was recently recognised by the World Confederation for Physical Therapy for his contribution to physiotherapy education in Africa.

Professor Seyi Amosun was recently honoured by the World Confederation for Physical Therapy (WCPT) for his contribution to physiotherapy education in Africa.

The WCPT presented Amosun with an International Service to the Profession Award at the 15th Congress of the WCPT in Vancouver, Canada, in June. This occasion marked the first time that the WCPT had made this and other awards for international service in the areas of physical therapy education, research, practice, and administration and policy development.

Amosun, who heads up the Division of Physiotherapy in the School of Health & Rehabilitation Sciences at UCT, played an integral role in the development of a degree programme at the University of the Western Cape (UWC) that enables physiotherapists to upgrade from a diploma programme to a degree in just one year, followed by a one-year master's programme.

Prior to the four-year physiotherapy degree model, therapists in Africa did a three-year diploma, says Amosun. 'The programme's focus is to overcome the major deficiencies in the diploma training programme."

In 2005 alone, 50 physiotherapists from 11 African countries completed the degree. That's adding a hundred more hands to the 5 000 physiotherapists, according to 2006 WHO statistics, on the continent. While UWC is still the only university offering this opportunity, it's a start to helping some 50 million disabled people in Africa, says Amosun.