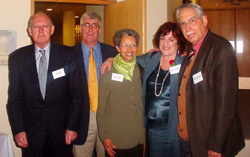 Dignity, identity and sexual freedom were some of the burning issues on the table as law experts converged at UCT to share their knowledge at a law and dignity conference. The two-day event, titled The Critical Jurisprudence of Laurie Ackermann; Law, Dignity and Transformative Constitutionalism, was held by the Faculty of Law from 26 to 27 July.

Justice Laurie Ackermann is a retired judge of the Constitutional Court of South Africa, and his critical jurisprudence formed the basis of the conference.

The conference was attended by some of the big names in the field from both South Africa and the United States. No fewer than five US law scholars and five South African justices of the Constitutional Court attended the event.