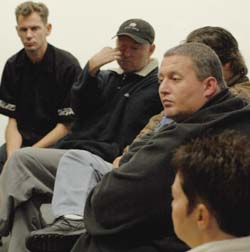 Sharing memories: Victims of apartheid violence spent a weekend sharing their experiences as part of the Narrative, Trauma and Forgiveness project.

Survivors of apartheid-era violence met at the Centre for Open Learning on 11 June after attending a weekend workshop aimed at dealing with trauma through the retelling of their stories.

As part of the ongoing interdisciplinary teaching and research project, Narrative, Trauma and Forgiveness, jointly co-ordinated by Associate Professor Chris van der Merwe of the School of Languages and Literatures and Associate Professor Pumla Gobodo-Madikizela of the Department of Psychology, trauma survivors spent a weekend together at the Catholic Conference Centre in Constantia.

The weekend was attended by survivors of the Highgate hotel 'third force' bombing in 1993, widows and mothers of the 'Mamelodi 10' who were lured to their deaths by police agents from Vlakplaas in 1986, and people who suffered the trauma of sudden forced removal when Protea Village, situated below Rhodes Drive, was proclaimed a White Group Area in 1959.

'Survivors communicate the '˜meaning' of their traumatic experiences by constructing stories and listening to the stories of others,' explains Gobodo-Madikizela. 'In our research we are interested in how the collective stories of the different groups we brought together give their life purpose and meaning.'

The weekend was made possible by a grant to the psychology department from the Sigrid Rausing Trust in the UK.