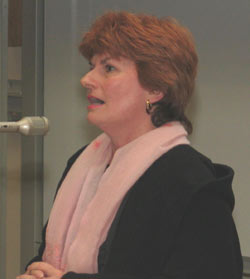 Cape Town is one of nine host cities for the event and the controversial 68 000-seat Green Point stadium - with its sunken field - has hogged local headlines.

'It's important to understand that it's someone else's event being hosted in our city,' Platzky said.

Nonetheless, the city was set to exploit spin-offs to develop industries like tourism and film-making, and to showcase innovation and research and development. Cape Town is also in the running for the International Broadcasting Centre Bid. About 2 000 media representatives are expected to cover the event.

Plans include a Fan Park on the Grand Parade and a pedestrian route through the city to the stadium. With its famous backdrop, this is an important factor, given that three times more people will see the Soccer World Cup than the summer Olympics.

Platzky, the former national co-ordinator for the Surplus People Project, has a triple deck of UCT degrees (BA, BSocSci and a master's degree in city and regional planning) and was SRC president in 1974. She is now based in the Premier's Department of the Western Cape Government, responsible for co-ordinating the province's 2010 World Cup Programme.