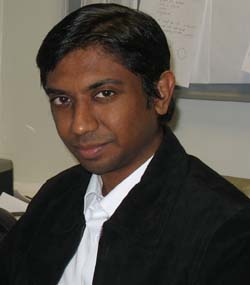 When Dr Randhir Rawatlal went to present his work at a recent international conference in Japan, he was concerned that its strong mathematical focus would provoke little interest among the delegates.

Instead, his presentations at the 5th International Workshop on Heterogeneous Ziegler-Natta Catalysis won Rawatlal the event's Young Scientist/Best Presentation Award.

The conference was organised by the Japanese Advanced Institute of Science and Technology in Kanazawa, and was attended by leading international researchers in the field.

'For the top researchers in the field to agree with my work gives me a huge confidence boost,' Rawatlal said. 'It also helps promote this theory which I believe should be used more widely.'

The title of his presentation was Development of an Unsteady State Model for Control of Polymer Grade Transitions in Ziegler-Natta Catalysed Reactor Systems.

The award was made for fundamental contributions to age-distribution theory and their applications in polymerization reactors.

A senior lecturer in the Department of Chemical Engineering, Rawatlal said this work has created new research opportunities and that collaborations with Canada and Japan are developing. In addition, Japanese and Korean companies have shown an interest in industrial applications of his model.

The highlight of Rawatlal's trip was when Tominaga Keii, who wrote Heterogeneous Kinetics, the first book Rawatlal read when he started his postgraduate studies, presented him with both the award and an autographed copy of the book.