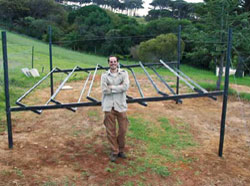 Many scientific experiments take place in the haven of the laboratory, out of the public eye. But botanist Dr Adam West's climate change trial in the Silvermine Nature Reserve may raise some eyebrows.

West, a postdoctoral fellow in the Department of Integrative Biology at the University of California, Berkeley, and in the Department of Botany at UCT, is erecting a series of rain exclusion roofs deep within the reserve to keep rain off sections of the fynbos. The drought-simulating exercise, which will take place over two-and-a-half years, will gauge the impact of climate change on the Western Cape's unique floral heritage.

West's rainout shelters will manipulate the climate; the clear, poly-carbonate roofs letting in light but excluding rain, simulating drier conditions. West plans to build the 4m x 4m structures in the reserve's remoter area, unseen except by more adventurous hikers or environmentalists who like to get off the beaten track.

He has also chosen sections of fynbos where he will not affect particularly rare and endangered species like disas or ericas.

Nonetheless, West is concerned that curiosity will attract people to the shelters.

"These experiments are difficult to do in the public eye. Even infrequent visitation to the sites can compact the soil, trample the vegetation and artificially influence the experiment."

Public information boards will be erected at the sites, describing the experiment's aims and providing sources for futher information. But the message will be clear: Please do not disturb.

The stakes are high. The Cape Floral Kingdom, which contains fynbos, is one of the world's six floral kingdoms. The kingdom has a wealth of 9 000 plant species and 70% don't grow anywhere else in the world.

Botanists fear that climate change will negatively affect this diversity. Climate change in the region will mean hotter, drier weather, with 20% less winter rainfall. Botanists anticipate that the fynbos biome, which clothes the province, will shift southeast into the Southern Cape.

Current simulations show that the fynbos biome may be reduced by 51- 65% of its current area, with a loss of up to 30% of Proteaceae from their current ranges.

Researchers like West need hard data to predict which species are likely to be strongly affected by changes in climate and which not. For example, the reed-like restios might be more tightly coupled to rainfall and more susceptible to drought than deeper-rooted Proteas.

"Our current bioclimatic models represent a 'best guess' at what will happen, but they may be inaccurate. For custodians of our biodiversity, like the South African National Parks, to be able to plan for conservation we must provide a clearer understanding of the impacts of climate change on this flora."

The work will explore fundamental physiological tolerances to drought in various fynbos plant types. Such knowledge will aid model predictions.

"One of the important parameters in bioclimatic models is soil moisture, yet there has been very little experimental work done to understand the drought sensitivities of different fynbos plant types," says West. "If we knew at what soil moisture plants with particular root systems or particular leaf types began to die, we could begin to improve the predictive power of these models."

Manipulative experiments are expensive, but West and his collaborators have attracted funding from the US and the National Research Foundation, as well as logistical support from South African National Parks. The research team consists of Dr Ed February and Professor William Bond from UCT, together with Dr Guy Midgely of the South African National Biodiversity Institute and Professor Todd Dawson of the University of California, Berkeley.

"There's been much talk about climate change," West said. "This research will help us understand the threats in our own back yard.

"If we don't look after our fynbos, who else will?"