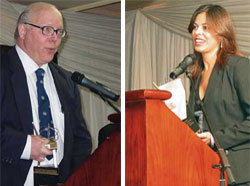 A mathematician, an engineer and a medical researcher win prestigious national science and technology awards

Keeping up a proud tradition, UCT scholars picked up three plum prizes at the National Science and Technology Forum (NSTF) Awards for 2006, presented in Johannesburg on 23 May.

Professor Doug Butterworth of the Department of Mathematics and Applied Mathematics netted the category-A award for contributions over a lifetime, UCT's fourth successive win in this category. Butterworth was singled out for his work on mathematical and statistical techniques that have provided a scientific basis for the management of marine resources.

Professor Pragasen Pillay - in the US at the moment - of the Department of Electrical Engineering walked off with the TW Kambule Award for senior black researchers over the past five to 10 years (category H). Pillay received the award for this work on renewable-energy technology and for developing much-needed human resource capacity in this area.

Finally, Dr Heidi Segal of the Division of Medical Microbiology was named as the winner of the TW Kambule Award for distinguished young black researchers over the past two to five years (category J). For the past decade, Segal has conducted research on how pathogens build up resistance to clinicians' arsenal of antibiotics.

The NSTF awards, now in its ninth year, honours individuals and organisations in 13 categories for their outstanding contributions toward scientific, engineering and technological development. The awards spring from a partnership between the National Research Foundation, the South African Agency for Science and Technology Advancement, Eskom and BHP Billiton.

A number of other UCT researchers were also in the running for accolades. Professor Johann Lutjeharms of the Department of Oceanography was UCT's second nominee in category A, while Professor Timm Hoffman of the Leslie Hill Institute for Plant Conservation, Professor Dan Stein of the Department of Psychiatry, category-H winner Pillay and Dr Virna Leaner of the Division of Medical Biochemistry were finalists in other categories.