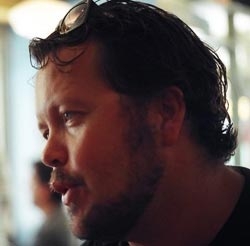 Alumnus and Emmy Award-winning producer/director Francois Verster is back at his alma mater.

Verster, who picked up a 2006 Emmy for his documentary, A Lion's Trail, is UCT's first Creative Film Fellow. During the course of his yearlong-stay at the Centre for Film and Media Studies (CFMS) he will act as advisor to the UCT Film Society and to documentary filmmakers. He will also run a lecture series and a short intensive documentary filmmaking course over July.

Verster wants to tap into as much local talent as possible.

'I am working on two different films at the moment and look forward to integrating the students into the process, whether as part of their research projects or as actors on the set,' he says.

On 17 May, the CFMS hosted Verster's inaugural lecture, The Idea of Documentaries, following the screening of his award-winning documentary, The Mothers' House, on 14 May.

After graduating from UCT in 1995, Verster went from feature-film sets in New York to documentary research in the UK. The latter tickled his fancy.

'There were so many South African stories waiting to be told,' he says. What started off as research on a girl growing up in Bonteheuwel ended up as The Mothers' House.

Thanks to a grant from the Percy Fox Foundation, Verster is the first of two creative fellows at UCT. The other is yet to be appointed.