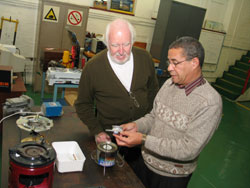 Testing one, two, three: Dr Phillip Lloyd (left) and Eugene Visagie in the mechanical engineering laboratory. They tested ethanol gel fuels and compared them to alternative fuel for cooking in low income homes.

The Energy Research Centre's Dr Phillip Lloyd and Eugene Visagie have won the Best Paper Award at the 2007 International Conference on the Domestic Use of Energy.

The paper details their efforts to test gel fuels and compare these to alternative cooking fuels. According to Lloyd there has been much interest in the use of ethanol gel fuels for cooking in low-income homes.

'Paraffin, used in appliances that have recently been banned, has been very dangerous. Gel fuels seemed to provide some hope of a safer alternative.'

Lloyd and Visagie obtained most of the gel and ethanol fuels available on the South African market and most of the appliances designed to use the fuels, in an attempt to identify the best combination. All were unsatisfactory, mainly because they gave off too much soot and carbon monoxide for use indoors.

They also found that the weight of gel fuel used to cook a meal was four times higher than paraffin or LP gas. Also, gel fuel costs about as much as paraffin, making it economically unfeasible.

The duo will continue their search for better solutions, saying: "Rocket science it isn't, but solutions will have an impact across the whole developing world."