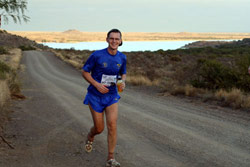 Okreglicki finished the 160km race, staged at the Addo Elephant National Park in the Eastern Cape, in an energy-sapping 21 hours and 30 minutes. The second-placed runner came in only an hour and 24 minutes later.

Okreglicki, who finished third in 2006, has now bettered his own UCT 100-mile record for the 40+ age group.

According to reports, the weather was fittingly 'extreme'. 'But that's never stopped AO before,' comments UCT coach, James Evans.