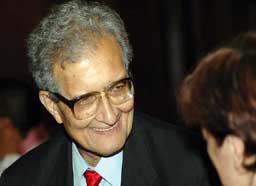 The 1998 Nobel laureate in economics, Professor Amartya Sen, will deliver the Vice-Chancellor's Open Lecture on Monday, 23 April, in the Jameson Hall at 19h00. Sen's lecture will be titled Poverty, War and Peace.

The lecture will be held in partnership with the Nadine Gordimer Lecture 2007, University of the Witwatersrand.

Sen will also head an open discussion on his lecture on 24 April, to be held in the main lecture theatre in the Beattie Building from 13h00 to 14h15. This discussion will be chaired by Professor David Benatar, head of the Department of Philosophy.

He is described as a rare example of an intellectual who has made a global impact on politics and is one of the outstanding voices for social and economic justice and democracy in the world today.

Sen has changed public perceptions about poverty and development. His influential work on the causes of famine in his classic book, Poverty and Famines, showed why thousands of people might be starving even though the production of food in a country might not have decreased.