Government and universities must co-operate 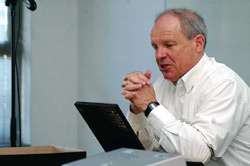 Emphasis: Prof John Goddard makes a case for collaboration between regional universities at a capacity-building workshop at UWC.

Government and universities have much to gain from working hand in hand, says UK scholar.

A prominent UK scholar has stressed that Western Cape universities and the government need to co-operate and understand one another to build the economy.

Speaking at a workshop on regional capacity-building at the University of the Western Cape (UWC), Professor John Goddard, deputy vice-chancellor and professor of regional development studies at Newcastle University, said that government was developing new services to grow the economy. But for those innovations to succeed, skilled people, who can be produced by universities, are essential.

"What is the government doing in the development of the region, and what are the universities doing for the region?" he asked.

Goddard added that partnerships between universities and the government were developing all over the world and that the two parties were still discovering each other, evaluating how can they work together and address barriers to collaboration.

"The bottom line is that both share an economic interest in building strong regional economies."

The workshop resulted from a Memorandum of Understanding that was signed by the four state-funded universities in the province, the national distance institutions, UNISA, and the Premier, Ebrahim Rasool, in October 2006, to enhance universities' contributions to socio-economic development.

Arising from the summit, scarce skills, the environment, social cohesion, and transport and infrastructure have been identified as areas for concrete collaborative projects.

Over the next few months, government and the universities will identify experts to work on various projects in these areas.

Goddard provided 24 examples of good practices, drawn from 13 regions that have participated in an Organisation for Economic Co-operation and Development project on Higher Education and Regional Development. These examples highlight the mutual benefits for regions and higher education institutions that flow from using research on local and regional issues to generate new knowledge about critical development challenges, while also improving the quality of people's lives.

Goddard was in South Africa as a guest of the UCT Institutional Planning Department, and was a presenter at UCT's environmental scan workshop.