Into the supercomputer future 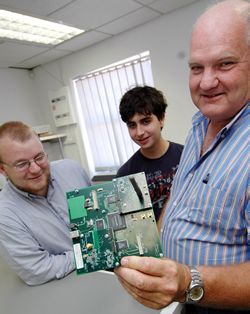 In pursuit of the next generation of supercomputers, two master's students from UCT's fledgling High-Performance Reconfigurable Computing Group (HPRCG) set off for Scotland in early March.

Peter MacMahon and Andrew Woods will spend three months at the Edinburgh Parallel Computing Centre at the University of Edinburgh as part of a new collaboration struck by group leader, Professor Mike Inggs.

The two will lend a hand with the Edinburgh centre's work to build a medium-scale high-performance reconfigurable computer.

This technology, built around a super-smart chip, is seen as a likely successor '“ faster and more energy-efficient - to current supercomputers, usually made up of banks of off-the-shelf processors.