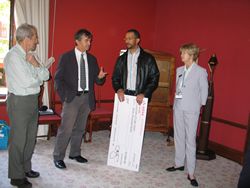 The competition, which kicked off in 1977 as a school-based event, is hosted annually by the mathematics and applied mathematics department to popularise maths among high school pupils.

Speaking at the handover, Dean of Science Professor Kathy Driver said maths was a key to vital skills development. "We need to improve maths and science literacy among schools and there is a huge amount of work to do. I hope your company will see this as a way of investing in the future."