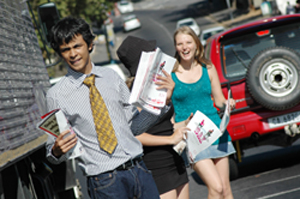 There may have been one or two false starts to the new academic year but it's all systems go with what looked like, going by the record number of applications, a bumper year for registrations. (Alas, numbers could not be confirmed by the time Monday Paper went to print.)

Sweltering January heat and early power outages didn't hold back over 3 000 other faithfuls either, those who registered for the evergreen, two-week Summer School, celebrating its 57th anniversary.

Marking the Summer School's conclusion was Professor of Archaeology John Parkington, who delivered the fifth Summer School alumni lecture: Archaeology and its Meaning to People: The Clanwilliam Living Landscape Project.

"Work in the field not only provides an archive of the past, but also a present and future link to job creation and transformation of that community," Parkington said.

On the student front, the opening of GraÃ§a Machel Residence took centre stage. The new residence on the UCT block offers 382 beds to first-year and returning women students. Well, almost. Building delays meant a phased release of accommodation, with 80 students having to be temporarily housed in adjacent residences. Teams worked around the clock to get things ready. Hats off to them.

In anticipation of a general influx of students, 96 sub-wardens reported to Baxter Hall for some intensive training in January.

"Sub-wardens play a critical role at residences," said Glenn Von Zeil, manager of Student Housing. "Not only do they assist wardens and operational staff, but they are the link between students and management."

But campus really came alive during Orientation, or O-Week, after Parents' Orientation, as first-year students tucked into some fun and games before the onset of serious work.

O-Week introduces first-year students to the various educational facilities and unique aspects of university life. It also gives clubs and societies a chance to do some soliciting.

Talking of fun, Sax Appeal went on sale on 15 February, giving students an opportunity to raid their mothers' and sisters' wardrobes in search of attire to suit the theme: Saxxy Royale. Together, about 2 500 students sold a whopping 34 000 copies. The remaining 11 000 copies will be sold in Pick 'n Pay outlets and tourist spots.

SHAWCO and RAG also kidnapped two former springbok players, Robbie Fleck and Robbie Kempson, bundling them into a helicopter headed for Cape Town International. From there they were taken to Khayelitsha for a first-hand experience of the healthcare education SHAWCO dispenses there.

Rumours that they were kidnapped by the Stormers team are untrue, says RAG.