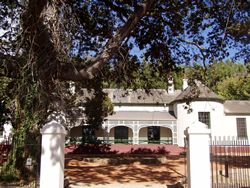 A new face for Wolmunster Residence.

After five years of planning and delays, the historical Wolmunster Residence, next to the Irma Stern Museum, is officially open.

This time not to students, though. The property, now accommodation for visiting staff, was acquired by UCT in 1970 for R40 000. It was a student residence until 2001.

In 2006 UCT spent in excess of R3-million to restore and renovate this unique property that was badly run-down, says Gloria Robinson, project manager at UCT Properties and Services.

The opening of Wolmunster Residence on 8 February drew much attention. Among the guests were Mr. and Mrs. Fagan, both distinguished members of the Heritage community.

The early- Georgian-style house is dated circa 1835, after which it was bought by William Porter, the first Chancellor of the University of the Cape of Good Hope.