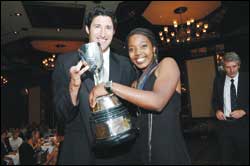 Cups runneth over: Siyoli Lusaseni receives the Sportsperson of the Year trophy from Ernst van Dyk.

Siyoli Lusaseni, one of South Africa's most promising squash talents, scored a rare double when she was named UCT Sportsperson of the Year, becoming one of just a handful of students to have received the award twice.

It's well deserved, though. After a low-key 2005 dedicated more to studies than squash, Lusaseni made an all-out return to the sport in 2006. She assisted UCT to a South African Students Sports Union (SASSU) win, was back in the national senior team for its famous victory over the Netherlands, and was captain of the South African student squad that took everyone by surprise to collect bronze at the World Student Games in Hungary.

But she wasn't a shoo-in for the Jamison Cup, which she first won in 2002. The other nominees included 2005 winner and Woman International Chess Master Jenine Ellappen who has enjoyed another successful year, sailor Gareth Blanckenberg who co-skippered the winning boat at this year's Lipton Challenge Cup, and three water polo women - Fiona Mallet, Jade Liddell and Robyn Brooker - who had all represented South Africa this year.

"I think it was a combination of her having represented South Africa at the highest level and having captained the national student side, with great distinction, which added almost another string to her bow," says John Donald, director of Sport and Recreation.

The water polo club won't be too upset that none of its three candidates picked up the Jamison Cup, though. They hogged just about all the silverware at the Sports Awards Dinner - Mallet was named the best first-year student, the club walked off with the Club of the Year trophy, Matt Kemp received the Turpin Cup for service to UCT sport, and the men's and women's first teams took both the Butterworth Cup as joint team of the year and the Landstem Trophy for performance of the year for its all-conquering showing at the SASSU competition.

"We had dreams of winning something - one trophy, maybe - but nothing like this," says Kemp. "It was unprecedented."

Other clubs did get a look-in, though. The tennis club won the Transformation Trophy, and Professor John Simpson, chair of the UCT Sports Council, made special awards to Pierre le Roux and Charlie Stuart for their long service to the UCT hockey club. And Sele Selamolela, a former member of the mountain and ski club who scaled Mount Everest this year (see Monday Paper volume 25 no 27 of August 18 this year), received the Chairperson's Award.

And those who didn't win anything this year won't even think of giving up. At least not after listening to guest speaker Ernst van Dyk, the six-time winner of the wheelchair section of the Boston Marathon, the first wheelchair racer to break 01h20 for the marathon, holder of the best time for the marathon (he broke the tape at 01:18.27 in 2004), and winner of the Los Angeles, Paris, Boston and Sechenkon Marathons in 2006, as well as 2006 Laureus Sport Star of the Year.

Not bad for someone born with congenital birth defects and destined, if his parents listened to the doctor, to no quality of life.

Van Dyk received a standing ovation for his talk on how he embraced life and change. Even MC Dan Nicholl, not one to warm to graduates of "farm school" University of Stellenbosch, was impressed.