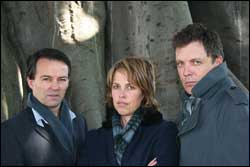 (from left): Stephen Jennings, Lara Bye and Warrick Grier performed in Conversations After a Burial on

The final season for 2006 of the Baxter Theatre Centre's popular Play>Ground series, called Director's Choice began on Sunday, and will run every Sunday throughout October at 17h00 in the Baxter Sanlam Studio.

First up was the dark and amusing family drama Conversations after a Burial by award-winning French playwright, actress and novelist, Yasmina Reza which was scheduled for Sunday,

For the rest of the exciting Play>Ground season, Geoffrey Hyland will tackle Noel Coward's Hay Fever on Sunday, Royston Stoffels will direct Joe Penhall's Blue Orange on and Paul Savage ends the season on with Four Women - End of the Floetics by Soubize Smith, Muna Hussen and Leeanne Stoddart, all at 17h00.

Play>Ground is a series of rehearsed play readings which provides a space for actors, directors and audiences to experience the very best of both local and international scripts performed by the cream of Cape Town's actors.

Discussions about all the works after the performances are welcomed, stimulating cultural debate and encouraging audiences to develop their critical theatre awareness.

Tickets are R25 per performance, and with one performance only, seating is limited and advanced booking is advised.

Book through Computicket or the Baxter Theatre Centre on