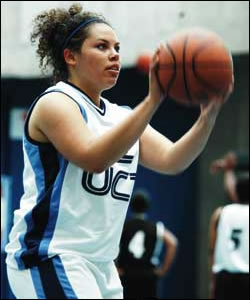 Sharp-shooter: Christine Parrish lines up for another shot at the Vikings goal in UCT's convincing 79-64 win.

It's not been the most memorable of years for the UCT Basketball Club in the Western Cape Basketball Association (WCBA) season, with not a single men's side making it into the playoff stages. But all is not lost. Although the women's second side lost their playoff games, the women's first team are still in the running for a place in the final. After losing the first of the three-match play-off games against Vikings, they rallied on Sunday, to win 79-64. The team's star performer on the day was Christine "Taaipopi" Parrish. The final play-off game took place this past Sunday,

The FNB UCT rugby first team very nearly pulled off a remarkable Super League A championship win. Juggernauts Stellenbosch University suffered a few surprise defeats towards the end of the season, giving UCT a look-in. In the final match of their year, UCT needed to bag five points - a win and four tries would have done the job against the other University of Stellenbosch side, Victorians. Sadly, it was not to be and UCT lost the match 12-27. With so much at stake, Maties drafted in a few first-team players and - the ace up their sleeve - Springbok fullback Werner Greeff, on the comeback trail after a seven-month injury break. But despite their rivals' star-studded line-up, UCT could still have taken the match and the title. "They took their chances, and we didn't," summarised coach Dave Mallett. But there's nothing to be disappointed about. After its most consistent season in a long while, UCT may still get the better of Maties in 2007.