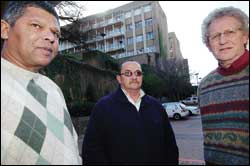 To the rescue: Thanks to Arthur Joseph and Malcolm McLean, here with Prof Allen Rodgers (far right), CPS quickly arrested two suspects involved in the attack on Prof Mino Caira.

Amid all the sensational headlines about the attack on Prof Mino Caira at UCT, the quick thinking and bravery of staff and students of the Department of Chemistry might have gone unnoticed. Here we tell the potted version of their story.

In the minutes after the attack on Professor Mino Caira in the Department of Chemistry on July 19, staff and students proved again that, when the occasion calls, they'll rush to each other's aid.

Once they heard Caira's call for help, a number of staff and students made for his office. First on the scene was departmental assistant Randal Muller, who was en route to a meeting with HOD Professor Allen Rodgers. The attacker slipped away and Muller went to help the injured Caira.

Caira's head, where he had been struck with a thick wooden stick, was bloodied, recalls Rodgers. Within minutes, staff and a handful of postgraduate students got Caira into a car and rushed him to Vincent Pallotti hospital, where he was immediately seen to. According to Rodgers' estimate, only some 20 minutes passed between the attack and Caira receiving treatment at Vincent Pallotti.

"Professor Caira was okay and calm throughout," says Rodgers. (So much so that Caira was more worried that his HOD get back to his desk.)

At the same time, chief technical officer Arthur Joseph and assistant technical officer Malcolm McLean heard the commotion and ran to the exits of the building, where they spotted two "suspicious individuals" - a male and female - both of whom had been seen loitering in the PD Hahn Building earlier in the day. A third member of the group - the alleged attacker - had disappeared, but Joseph and McLean tracked the man and woman from Cissy Gool Plaza to close to the Kramer Building, where Joseph went to alert Campus Protection Services (CPS).

In Main Road, close to the Baxter Theatre Centre, CPS officer Michael Mzwakhe Bova and traffic officer Harry Fisher accosted the two after Joseph and McLean pointed them out. (More CPS officers quickly joined the group.) The suspects first denied ever having been on campus, but once McLean told them he had just followed them from there, quietly went with CPS.

"They sensed that we were not going to joke around," says McLean.

"This is an example of staff members that were aware and vigilant," says John Critien, executive director of the Properties & Services Department. "They acted responsibly by not approaching the suspects. They alerted CPS who was then able to arrest the suspects."

The man and the woman were then taken to the Rondebosch Police Station. According to Steven Ganger, crimes investigation manager at CPS, the two gave up the name of the attacker, who was arrested in Mitchell's Plain the next day. The suspect apparently confessed to the attack to the police, and has since appeared in court.

Rodgers has nothing but praise for his staff and students. He's also recommended that Joseph, McLean and Muller be recognised by the university for their valour.

"I'd like to commend them for their courage and bravery, at possible risk to their own wellbeing," he says.

According to Joseph, he and McLean had acted on instinct.

"The first thing that comes to your mind is that you need to apprehend the people that did this," he says.

Prof Caira has since returned to work. Rodgers has called a meeting of the department to talk on ways to better secure the PD Hahn Building.