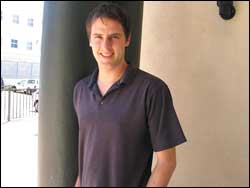 UCT's 2005 Keswick Prize for Lucidity winner Grant Harrison once doubted he would ever get a university degree.

Twisting and turning between engineering and commerce, he left UCT in 2001, unable to find his academic niche. It was only once he signed up for philosophy and religious studies in 2002 that he found the match he was after.

The rest was plain sailing, all the way to his honours degree in philosophy last year.

"It was such a relief," he says of the barter. "It changed work into something enjoyable."

It was his word essay for the English honours course Reading Contemporary Theory that impressed the judges. The piece is a commentary on the conflict between contemporary philosopher John Searle and Jacques Derrida, often described as the founder of Deconstruction.

It sets up the discussion by looking at whether or not that particular and infamous debate that took place between Searle and Derrida with respect to certain fundamental concepts in the philosophy of language represents a confrontation between the Analytic and Continental philosophical traditions more generally.

The focus of this confrontation between the two philosophers concerns the early twentieth century philosopher and teacher of Searle, JL Austin, and his notion of the "performative".

In the dispute, says Harrison, Derrida tries to expose the contradictions that underpin Austin's Theory of Speech Acts. This prompted Searle to respond with a defence of his mentor, a defence comprised of a point-by-point analysis of how it is that Derrida misreads the Austinian project. Derrida then replies to Searle.

"Ultimately, the essay endeavours to show that in some sense a confrontation between the Analytic and Continental traditions did take place in this specific debate, but that more generally genuine confrontation can not be said to have transpired, given the very different methodologies the two philosophical systems employ with respect to approaching key issues in the philosophy of language. In the end, it emerges that, for the most part, the two thinkers are simply talking past one another."

The Keswick Prize is sponsored by Sir Chips Keswick, chair of the Hambros Bank Limited in the UK and is awarded to a third- or fourth-year student, in any technical field, for writing the most lucid essay. Sir Chips established the prize several years ago to encourage the use of clear, jargon-free prose in writing on technical subjects.