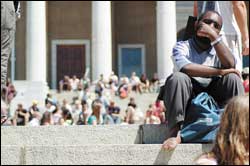 Disconsolate: A UCT students waits on Jammie Steps for electricity to come on again. The outages of last week caused disruptions across the city.

It is likely to get worse before it gets better.

This is the message from electricity delivery expert Professor Trevor Gaunt on the power cuts that hit the Western Cape in the past week. Gaunt, who has a special interest in the subject, says several factors are bedevilling electricity delivery and there is no quick-fix.

Eskom has warned of this for some time now, but the message has been lost in the run-up to the municipal election, he adds.

Reasons for the electricity crisis include a general decline in the reinforcement of transmission lines and the failure to build new power stations. This he puts down to uncertainty over restructuring, which has only recently been resolved, putting more responsibility back in the hands of Eskom.

Eskom has recently commissioned UCT to look into the question of reliability and the cost of interruptions, a hot topic right now.

Gaunt also points out that there are four ministries with a hand in electricity delivery, which further complicates strategic decision-making.

The recent problems at Koeberg, where one generator is out of commission for an indefinite period, and the Western Cape's healthy growth rate, now mean there's simply not sufficient electricity for the region, at least for the immediate future.

The situation is likely to worsen between now and July when Koeberg will have to take down its second generator for refueling and maintenance, effectively putting it out of commission.

While April and May are slated for this work, if it extends into winter, when power demand increases, we could see this week's problems repeated many times over.

Some light at the end of the proverbial tunnel, however, is t hat Eskom has had responsibility restored to it (after a rethink over restructuring) and there is now a plan to build new gas-powered stations that should come on stream during 2007. This means that in about a year, the situation is likely to ease.

In addition, there are plans to upgrade the transmission lines to the Western Cape.

Gaunt says the conditions that caused the transmission lines to short circuit – due to a build up of soot and humidity – are common in February after a long, dry summer, and therefore not extraordinary.

And while the big picture looks bleak, UCT has scrambled to secure its computer networks – a big issue for the academic community that relies heavily on e-mail communication both internally and with external stakeholders.

In the meantime, the university has announced its intention to make up for teaching time that has been lost in the past week, and students have been advised to report for lectures regardless, as alternative venues will be found.