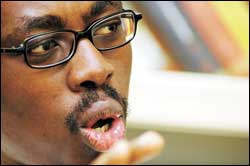 In a department steeped in history, Mayosi has added his own page as the first black academic at its helm.

A University of KwaZulu Natal and UCT graduate, and with a doctorate in genetics from Oxford, this P-rated cardiologist considers his latest achievement as the "end of the beginning" of his career. he has now embarked on a journey that will take him to even greater heights while making a difference in his field.

Mayosi has a clear view of the challenges faced by South African medicine. HIV/AIDS and other infectious diseases are a primary concern, along with heart disease and cancer. another challenge is the flight of skills from the profession, with qualified doctors migrating abroad where they are in great demand.

Finally, there has been a dramatic decline in clinical research, with South Africa being overtaken by emerging countries in Eastern Europe and South America in producing world-class publications.

Nevertheless, he prefers to focus on solutions, and the key to his tenure is an eclectic mix of medicine, economics and politics, which he calls "renewal, modernisation and Africanisation".

His aim is to revitalise general medicine by creating a pipeline of young professors committed to pursuing novel ideas and restoring the department's contribution to clinical research. He also believes that as Africans "we need to create a forward-looking cult of modernity", and that it is high time the continent became a significant player on the world stage starting, of course, with UCT.

He envisions Cape Town becoming the Oxbridge of Africa, attracting the continent's brightest medical students, armed with scholarships from the world's major funders.

"Through training these students, we channel that funding into Cape Town, and thereafter repatriate it into the continent when they take their skills back home," says Mayosi.

Many students, he says, especially from West Africa, prefer to return home rather than leave the continent.

"For 85 years, the department has been looking to its origins in Europe for ideas, for its symbols, and its language," says Mayosi. "For example, it is not unusual for a Xhosa-speaking patient to have no history taken because the doctor cannot even greet the patient in their language. we need to discover the language of our patients and connect with the soul of Africa."

The over-riding characteristic of Mayosi's outlook is the principle of Batho Pele (Sotho for "people first"), focusing on people development, rather than stifling their creativity through too much bureaucracy. Connected to that is his guiding principle of non-racism, and making the department a home for all.

"We must become the first generation who see themselves as South Africans, not as blacks, whites, coloureds or Indians."

If Mayosi has his way, the department of medicine will soon be back in the history books, but with an african twist.