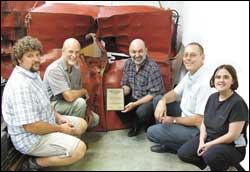 It's a blast: The authors in front of one of the quarter-scale hulls with the award plaque, (from left) Victor Balden, Dr Izak Snyman, Prof Gerald Nurick, Danie Malan and Dr Genevieve Langdon.

The publication, Numerical and Experimental Investigation of a Scaled Ship Hull Subjected to an Underwater Blast, scooped the Simon Perry Award for the best paper at the 6th Asia-Pacific Conference on Shock and Impact Loading of Structures.

The conference in Perth took place in December, 2005, and was attended by over 100 delegates, mainly from the United States, the United Kingdom, Australia, Asia and Canada.

The award represents a coup for the two parties. Of the 100 papers delivered, six possible winners were identified and sent to three international reviewers.

The award honours the late Simon Perry, a professor of civil engineering at Imperial College, London for many years and thereafter at Trinity College, Dublin.

Perry was an expert in impact loading of structures, particularly concrete structures.

BISRU and the CSIR are collaborating on a variety of projects that currently involve four CSIR employees registered for postgraduate degrees at UCT.

In this project MSc student and TSO member Danie Malan was responsible for the experimental component of the work.