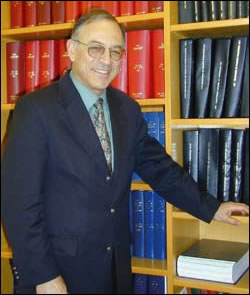 The growth of research as an international collaborative endeavour - often driven by the interests of powerful nations - must be guided by sound research ethics, writes Professor Solly Benatar, Chair of the UCT Research Ethics Committee.

As UCT remains somewhat behind world-class universities in its attitudes and approaches to research ethics, it is appropriate to reflect on the importance of this topic to facilitate UCT's progression towards internationally-recognised standards.

High-profile international interest in the ethics of human research was initiated by the revelation of atrocious experiments carried out by the Nazis and through the resulting Nuremberg Code in 1949 to regulate all human research. Prominence given in the 1960s to ongoing unethical research on humans in prestigious medical schools in the United States and the United Kingdom, and the public outcry in 1972 on exposure of the 40-year-long US Public Health Service study of the natural history of untreated syphilis in a cohort of black men in America, boosted interest in regulating human research.

National and international guidelines have since facilitated universal approaches to regulation of human research through research ethics committees in universities and other organisations.

Despite all this interest, some unethical research continues. For example, in recent years federal agents temporarily shut down the entire research programmes at two US research universities following the death of research subjects, in order to scrutinise their ethics review processes.

In the case of the gene-therapy death at Duke University, the subject had not been adequately informed of the potential dangers of the study. At Johns Hopkins University, an avoidable death resulted from failure to perform an adequate literature review that would have revealed previously documented fatalities from use of the experimental drug.

The Virodene affair in Pretoria, the Bezwoda debacle at the University of the Witwatersrand and growth of conflicts of interest associated with commercialisation of research remind us of our local vulnerability to unethical approaches to research.

It is increasingly acknowledged that the ethics of research on humans is also applicable to research in the social sciences and other disciplines that may cause considerable psychological harm and be exploitative of vulnerable people. The HIV/AIDS pandemic has greatly increased sensitivity to the range of psychological and physical harms that may follow unethical medical and social science research.

These concerns have been buttressed by the growth of research as an international collaborative endeavour - often driven by the interests of powerful nations - with the potential to exploit vulnerable subjects and researchers in developing countries.

Sensitivity to the need to reduce such exploitation by empowering research ethics committees in developing countries to participate more actively in the evaluation of the ethics of human research led the US National Institutes of Health to fund, through its Fogarty International Centre, 18 centres around the world (budget of US$4-million per year) to promote capacity-building education in research ethics in developing countries.

UCT is fortunate to have been funded (US$800 000 over six years) to provide such education in research ethics for 48 mid-career professionals from southern African universities and research institutions and to run an annual workshop for about 100 members of local research ethics committees.

At UCT several such projects are underway, and the UCT Research Ethics Committee and specific researchers have had to acquire certificates of competence in research ethics in order to be funded. At present the level of education and knowledge required to acquire credibility are minimal - but this is changing.

Until a few years ago there were only two RECs at UCT. The Faculty of Health Sciences' REC evaluated over 300 medical research protocols annually. The other, a central university committee, examined a handful of projects each year - usually sociological studies on students or staff undertaken by visitors from abroad.

In recent years every faculty at UCT has been encouraged, indeed required, to set up a REC for several reasons. Firstly, as the initial requirement for research to be ethical is that the scientific design of the study and the methodology used are capable of answering the research question, cognate scholars in each faculty are best placed to review all research proposals to ensure that these requirements are met.

Secondly, there is a need to sensitise researchers in all faculties to the range of ethical issues that arise in the course of research on humans. These include the need to obtain informed consent, maintain confidentiality, appropriately balance harms and benefits of research and avoid exploitation and conflicts of interest. Guidelines for authorship also need to be set to ensure fair treatment of junior staff and to preserve freedom to publish.

Thirdly, it is necessary for researchers to receive some education about research ethics so that the review process goes beyond mere policing. Studying the substantive body of knowledge on research ethics and internalisation of ethical excellence by researchers is the route to sound practice. Several procedural requirements also need to be met to ensure appropriate accountability.

As Chair of the UCT Research Ethics Committee it has been fascinating to see how resistant scholars in some faculties were initially to the idea of submitting their research to ethical scrutiny. However, this initial reluctance has been overcome to a considerable degree and research ethics committees have now been set up in all faculties at UCT. In a forthcoming article I shall review what has been achieved.