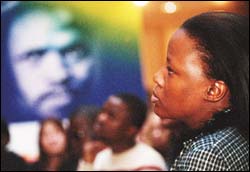 Last week's World @ UCT Festival lived up to its reputation as a high-fun occasion, but it also proved a very eventful one.

The event, staged each year to celebrate the diversity that international students bring to the campus, concentrated on issues around two specific themes - UCT's 175-year anniversary and the country's 10-year old democracy. As such, a committee of international students decided that topics such as HIV/AIDS, human rights and the empowerment of women would warrant some scrutiny. The students, assisted by Saph'ulwandisile Vika and Nosizwe Mgudlwa of the International Academic Programmes Office (Iapo), also assembled a galaxy of high-profile guests, including minister of education Naledi Pandor, starlet Rosie Motene of Generations fame and television and radio personality Tim Modise.

But students suffered a double whammy last Wednesday, a day dedicated to HIV/AIDS issues. Firstly, Pieter-Dirk Uys and his alter ego Evita Bezuidenhout both had to bow out at the last moment. Then minister of health Dr Manto Tshabalala-Msimang, lined up for a discussion that promised to be heated, called through her eleventh-hour apologies. Dr Rose Mulumba, director of HIV/AIDS policy in the government, stood in for the minister.

Despite such setbacks, the students did not let their celebrations wane, and the rest of the week went pretty much to plan. This included regular movie screenings, a poetry/jam session featuring DJ Rudeboy Paul, and the centrepiece of the festivities, the closing festival on cultural expression, held last Saturday.