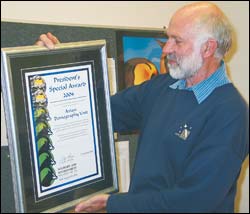 It's a cert: Prof Les Underhill shows off the WESSA certificate.

The Avian Demography Unit (ADU) has received a President's Special Award from the Wildlife and Environment Society of South Africa (WESSA), recognising their exceptional and sustained contribution to ornithology, particularly the understanding of bird populations in southern Africa, and, through these efforts, their contribution to the conservation of various species.

The award was collected on behalf of the ADU by director Professor Les Underhill, who dedicated it to his team, saying the unit's successes were as a result of a group effort.

Held in Kimberley, the ceremony lauded five winners, including a posthumous Gold Medal to Dr Richard Liversidge for his life-time contribution to conservation, and Dr Oluf Martiny, a past president of WESSA. Martiny has played an important role in a wide range of environmental issues from malnutrition and AIDS to community-based conservation in Limpopo Province.

The ADU's accolade recognises specifically their work in conserving African Oystercatchers, frogs, White Storks and other species and highlights the role of thousands of volunteers in their bird and frog atlas programmes.