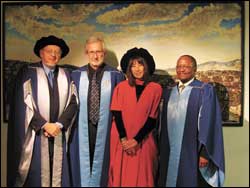 The Faculty of Engineering and the Built Environment had a full programme of inaugural lectures this year with three members of staff sharing insights into their areas of expertise.

Professor Vanessa Watson of the School of Architecture and Planning addressed the topic of conflicting rationalities in South African cities in her talk that argued that in both urban planning thought and practice there was insufficient recognition of differences between people. She said planning was often based on a set of ideas around the universal nature of human beings and human societies which was highly problematic.

The lecture used Cape Town as an example of a city in which both modernist thinking and a belief in universality have shaped its physical development. In the past this has meant the planning of "suburbs" for lower-income people, based on erroneous assumptions of steady employment, rising incomes and full car-ownership.

In the current period, it translates into "one-size-fits-all" housing and service delivery across the city: the conflict between equality of citizenship and "difference" arising from income inequality, cultural, religious and other differences is unresolved.

In his lecture, Associate Professor Trevor Gaunt of the Department of Electrical Engineering gave a talk on discovering electricity delivery.

Professor Jon Tapson, also in the Department of Electrical Engineering, addressed the topic The Ghost in the Machine: Noise and Feedback in Sensor Circuits, a topic which has been researched since 1992. His talk focused on an investigation into the effects of noise and nonlinearities in feedback sensor loops.