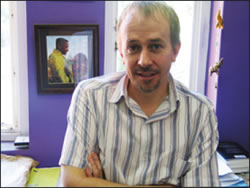 The perception that the early relationship between a mother and her infant, poor socio-economic conditions, and postpartum depression among new mothers, affects the psychological and developmental health of their infants, has been borne out in a new paper co-authored by Dr Mark Tomlinson of UCT's Child Guidance Clinic and Professors Lynne Murray and Peter Cooper of the University of Reading in the United Kingdom.

Published in the September/October edition of Child Development (Vol 76, pp 1044-1054), the study is a follow up to an earlier paper that found a relationship between postpartum depression and disturbances in aspects of the mother-infant relationship. In the initial paper, almost 35% of postpartum mothers from two areas of Khayelitsha were found to be suffering from postpartum depression. Of concern is that this rate is three times higher than in Britain, a standard of the developed world.

Mothers and babies were screened when the infants were two months and 18 months old. This study assessing mother-infant attachment is a first for South Africa and only the second in Africa using the Ainsworth "strange situation" methodology (the other African study was conducted among the Dogon tribe in Mali).

Results show that at 18 months 61.9% of the babies were "securely attached". This figure is interesting in that it is in line with many cross-cultural studies of infant attachment and is similar to that which might be found in more affluent studies, an encouraging sign for parenting in adverse circumstances.

Other results were that 4.1% of the infants were "avoidant", 8.2% were "resistant" and 25.8% were "disorganised", the latter setting off alarm bells, as in other studies disorganised attachment has been linked to poor infant outcome.

Tomlinson says that the relatively high levels of disorganised attachment may be partly to blame for the social problems many youths experience in South Africa.

Interestingly, his latest paper says the low levels of avoidance attachment shown by babies may be partly linked to the practice of mother's carrying their babies on their backs.

Tomlinson, a master's graduate of UCT and a PhD from the University of Reading (Britain), says too little research is being done in the field in developing countries. In a recent survey, Tomlinson and Professor Leslie Swartz have shown that "while 90% of the 135 million babies born in the world each year live in low-income or developing countries, only 4% of the articles in the 12 main international infant and developmental journals describe the experiences of babies in the developing world".

The pressures on parents, mothers in particular, in the developing world has an adverse effect on child development. In South Africa the inventory is familiar with high levels of socio-emotional distress, increased school drop-out rates and, at the far end of the scale, criminality.

Long-term follow-up is needed, both in terms of following up the children from this study, but also in terms of implementing early mother-infant interventions.

"In a preliminary intervention study in Khayelitsha our team has shown that it's possible to improve the quality of mother-infant interaction by supporting mothers through pregnancy and the first six months of their babies' lives."