Life as we don't know it 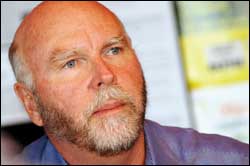 The Baxter has seen many an excited theatrical buzz, but the occasion on November 11 may well have been unique as science enthusiasts clamoured for the last few available seats for Dr J Craig Venter's delivery of the Vice-Chancellor's second open lecture.

In the audience were UCT's finest minds, eager to hear the views of the man who sequenced the first genome from a living species (the bacterium Haemophilus influenzae) and who more famously led one of two teams to sequence the human genome.

As founder and president of the J Craig Venter Institute and the J Craig Venter Science Foundation, he has set his sights on building a synthetic living organism from scratch, and is leading a global expedition to obtain and study genetic material from the world's oceans using his shotgun sequencing technique.

Initial results from the sampling aboard his yacht Sorcerer II, which spent a month berthed in Cape Town on one of its stops as it circumnavigates the globe, have revealed that there are enormous numbers of undescribed bacteria, archaea and viruses, a biomass that exceeds that of all the plants and animals in the visible world. These findings are rewriting the textbooks on what we know about biodiversity.

After the lecture, he talked to journalists and spent an afternoon with researchers at the Institute for Infectious Disease and Molecular Medicine before rushing back to Sorcerer II where he had more people to see.

These views are distilled from his responses at the press conference, which led him to remark: "This really is a philosophical town!"

On creating a synthetic organism:

I think the tools now exist for trying in the next couple of years to synthesise a minimal bacterial cell in the laboratory. That doesn't require lots of computer power (unlike assembling a human genome).

On the implications of this research:

My view is that nothing should be made to be released into the environment. I don't think anybody should deliberately make pathogens. I don't think we should try to engineer the human genetic code. Those are my personal views.

On the abundance of life:

I predict that ... life will be ubiquitous and that it will have the same chemical basis wherever we look. I think the finding of water on Mars is very exciting and I feel relatively certain we will either find life or remnants of life there...

Because of these huge distances in time it's just difficult to do the kind of sampling we'd love to do. I am certain we will find every microbe and virus in our upper atmosphere. It's a question of how far these ranges extend.

On fundamentalism and science:

My personal view is there's so much complex change. We have politics of fear in our government so that people resort to a certain amount of fundamentalism out of security.

I hope it's a passing phase because when you resort to fundamentalism, basically what you are doing is abdicating thinking. You are saying: "OK, I'll let somebody else do the thinking for me." I haven't seen too many people I'm willing to abdicate that process to. The US has to be concerned even for economic competitiveness. If we raise a generation in the US that is scientifically illiterate, the US will become a third-rate scientific power... This affects every aspect of society.

On the origins of life:

When it comes to how life originated, I'm willing to accept anybody's explanation for that. There's a difference between a belief system and scientific fact and a search for scientific explanations. I don't view them as being incompatible except when people start to use their belief system as a political system and try to stifle knowledge as a result. That's when they come in conflict.

I think the laws have a good sound basis. A lot of what I understood drove (them) is pharmaceutical companies looking for new drugs in the Amazon and other places and not sharing the profit or value with the native country. Those are good principles.

Some of those things are now being used to block the advance of basic science. Some governments don't make the distinction between bioprospecting and basic science...

There are no bigger currents than happen right here off the Cape. Something that comes across the South Atlantic as it comes into the 200-mile limit of South Africa, those become South African organisms. As they move off and go across, all of a sudden they are owned by Australia. Somehow we have to recognise the common heritage of the planet.

On information in the public domain:

On his "sense of wonder":

I have to say I experience a sense of wonder at looking at all of it. I've had the privileged position of being, along with my colleagues, the first one to look at a complete genetic code of a living species. I've said this before. With Haemophilus influenzae we had all of 1 800 genes that explained the biology of this cell. Of course I felt a sense of wonder. I also felt a sense of frustration. I knew there was far more information than we could decipher from just looking at that sequence-based information.

Early on in my career I had this naÃ¯ve view that, for example, the National Institutes of Health was a place where knowledge accumulated. It was only when I went there that I found there was no "there" there. There is no place that knowledge accumulates except in the minds of individuals. So we don't have a systematic way, other than libraries where we store this information, of accumulating and integrating information.

The problem with influenza virus, as you know, is by the time we have worked out the structure of the emerging infection, there is almost a year lag before new vaccines are available. We need to really shorten that time very dramatically, especially as we saw with SARS. Someone in Hong Kong that's infected can get on a plane and fly to Toronto and start infecting people within a 24-hour period. We need new tools and I think synthetic genomics is going to be one of those ways that we can rapidly manufacture and develop vaccines. It's an idea, obviously...

I don't think computer power can increase fast enough for what we need to do.

I think the biggest concept that I have difficulty with, and I think most people do – is the concept of time. We measure time based on our lifetimes. So, I have difficulty (conceptually) in understanding billions of years of evolution, based on my own personal references. Maybe after I have lived a few thousand years it would look different, but even a few thousand years is still nothing. All modern human existence, the last years, is but a few seconds in the total biological spectrum on this planet.

We are all burning oil and coal. We are all contributing to climate change, adding carbon dioxide to the environment...

It's a philosophical thing. We think these environments are so much larger than us, we can't really impact them as individuals. But there's not an ocean that we've been in where we haven't encountered plastic trash every day. In some places where currents converge, the amount of trash is truly extraordinary. In the Indian Ocean we didn't find a single beach that wasn't covered in flip flops. I don't know if that's a result of the tsunami. We've never seen that anywhere else in the world...

Each of us thinks, you dump a little motor oil in the water in the bay, you're not really contributing to anything. We fish out the oceans. Well, I'm just eating a steak. That's not going to impact anything. When you multiply anything we do by six or eight billion it has a huge impact and we are slowly destroying our environment. The oceans and these organisms, as you know, are the source of the oxygen we breathe. We can't continue to modify life on this planet at the rate we are doing it, if we expect to survive.